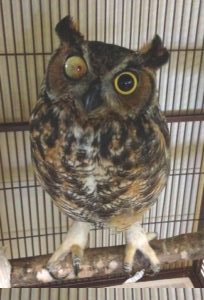 We received a call in October, 2012 from a gentelman who had found an injured great horned owl by the side of the road near San Marcos, Texas.  He brought the owl to rehabilitation facility in San Antonio, but since the owl was blind they were going to euthanize him.  The man was calling around to other centers to see if anyone would accept the bird in this condition.  Friends of Texas Wildlfe agreed to take the bird with the intention of letting him heal and then having him stay with us as an educational ambassador.  Winkie, as he became known, was transferred to our care at the end of October.  He was suffering from head trauma and had obvious damage to his right eye as its pupil was very dilated and fixed.  He settled in and quickly became a favorite around the center.  Within a couple of weeks, we began to notice that he was tracking us as we walked past his cage, more so than would have been just by hearing us, so it was decided that he needed to visit an eye specialist to assess how much he was seeing.  We were pleased to learn that the vision was returning to his left eye as the head trauma resolved, although he would remain blind in the right eye which was damaged beyond repair.  It this point we switched gears, thinking that perhaps our new friend might have a second chance at living wild again.  We moved him first to a small flight enclosure to see if he could find his food (killed prey at this point), and he proved he could find his meals.  Next, we transferred him to a full-flight facility to test if he could hunt live prey.  Even though he was still blind in one eye, he proved he could successfully hunt and catch live prey.  Although we knew we would miss him, it was decided that Winkie would be able to fend for himself again in the wild, and he was released back into the wild on March 8, 2013.