It’s that time of the year when focus seems to turn to spooky themes, nocturnal happenings, and all things that go bump in the night.  In some cultures, owls are considered to bring good fortune, while other cultures view them as harbingers of death.  Their wide eyes give them the appearance of being wise, or some would even say magical.  Can they really turn their heads all the way around?  Do they really have horns on their heads?  The images of owls seem to

be everywhere, so we thought it would be a perfect time to explore what is fact and what is fiction about owls.Owls are perfectly-designed hunters. Their skeletal structure is very light and strong, and many of the bones which would be separated in mammals are fused together in owls, making them strong to support their weight on the ground. In addition, some of their larger bones are hollow with bony internal bracing. This helps reduce overall weight. Although some owls can be quite large, even the heaviest of the species in our area generally weighs no more than five pounds. There are lots of stories and urban legends of owls flying off with domestic pets, but even the largest owls found in our area are not capable of doing so. Owls are known as silent flyers, so you will never hear an owl flapping overhead. Their flight feathers are edged in fringe-like tips, which cuts down on air turbulence and effectively muffles the sound of flight. Many owl species have asymmetrical ears. Having ears located at different heights on their head makes them more able to pinpoint the location of sounds in multiple directions. While owls cannot actually turn their heads all the way around, they can rotate them up to 270 degrees in either direction. They have fourteen neck vertebrae (twice as many as humans) and they also have a special arrangement of the jugular veins to ensure that blood supply is not impeded as the neck is rotated. As nocturnal animals, owls have very large eyes. These large eyes help to improve their hunting efficiency, especially under low-light conditions. Their well-developed eyes are actually not eyeballs as such, but elongated tubes which are held in place by bony structures in the skull. For this reason, an owl cannot move its eyes at all to look side to side or up and down, but rather they have to pivot their head to look around. Most owls are monogamous, and they form strong pair bonds. 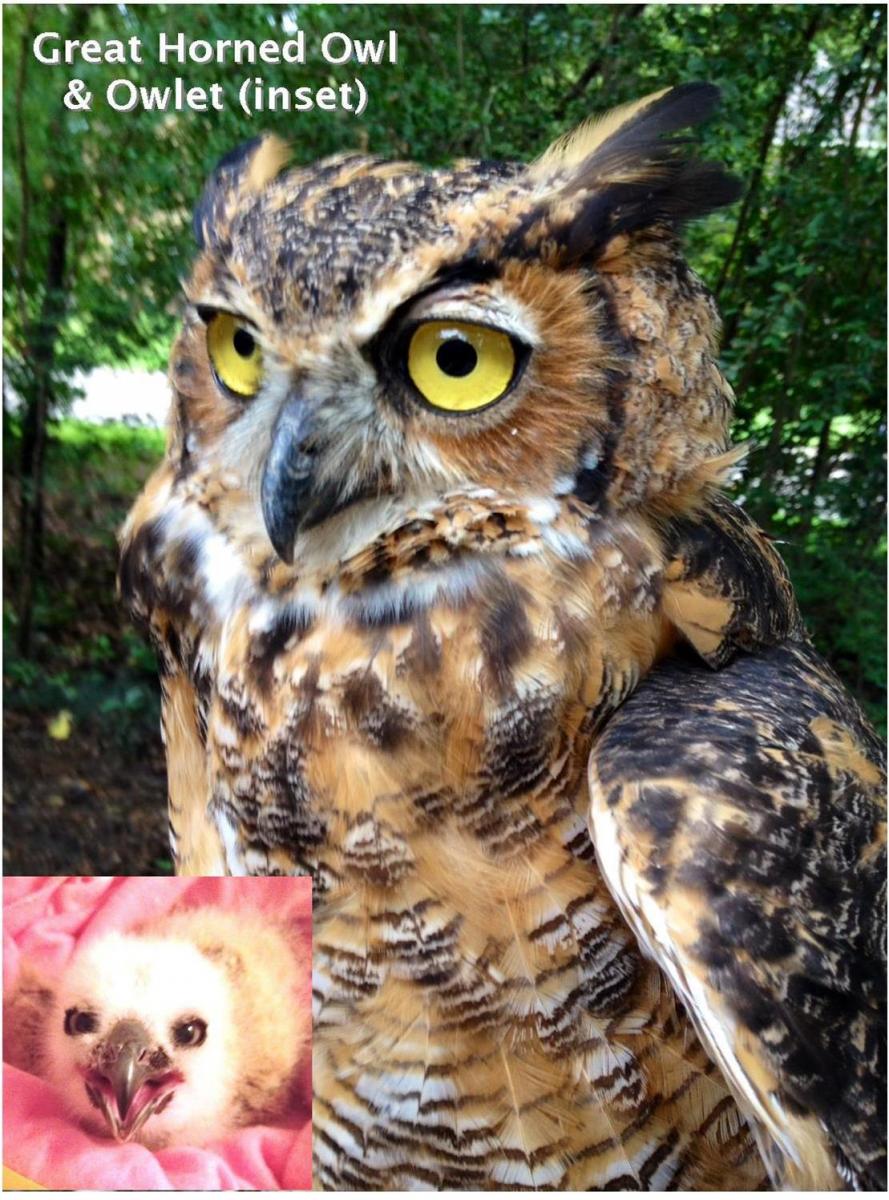 Around Southeast Texas, we have four owls that are commonly found. The first and largest of these is the great horned owl. The great horned owl can range in size from 18 to 25 inches in height and from 2 to 5½ pounds in weight, with the females being larger than males (as is also true for most species of owls). The “horns” on their heads are neither actual horns nor ears; they are simply tufts of feathers. Their large eyes are bright yellow. Great horned owls are very adaptable and can be found in suburbia as well as in woods or farmlands. They nest in tree cavities, stumps, caves, or in the abandoned nests of other large birds. In our area, nesting occurs in December/January and both the male and female incubate one to four eggs (although two is typical). While nesting, the male also hunts for food, and once the owlets hatch both parents will hunt to provide food. They are fiercely protective parents and have even been known to attack humans who wander too close to their young. The young owlets leave the nest at about six to eight weeks of age, although they cannot yet fly. These fledgling owlets may appear to have fallen from their nest, but in a natural wooded area bushes and smaller trees provide a ladder of sorts and allow the chicks to climb to a higher perch until they can fly. In another three weeks, the young owls will have learned to fly. The parents will continue to feed and care for their offspring for several months, often until as late in the year as October. The great horned owl is the only owl in our area which truly “hoots”, with the male having a much deeper tone to his call than the female. Mated pairs can often be heard calling back and forth to each other late at night as they hunt. They eat a wide range of rodents, reptiles, insects, and fish, and they will commonly kill and eat skunks.

Barred owls are slightly smaller than great horned owls, ranging in height from 17 to 20 inches and weight from 1 to 2½ pounds. They have brown and white striped plumage (hence the name “barred owl”) and dark brown, almost black, eyes. Barred owls tend to stay in relatively small territories, most often 5 square miles or less. They prefer old forests and swampy areas. Barred owls prefer to nest in tree cavities but they will also make use of abandoned platform or squirrel nests. Most nesting sites will be 20 to 40 feet high in a large tree and from 1 to 5 eggs are laid in January or February. As with all owls, each egg is laid two or three days apart, and the owlets hatch in the same order they were laid, so in large clutches there can be a huge size difference from chick to chick. Young Barred Owls can climb trees by grasping the bark with their bill and talons, flapping their wings, and walking their way up the trunk. The owlets leave the nest at about four to five weeks old and are called branchers while they hop from limb to limb exercising their wings and learning to fly. The owlets are usually independent by the time they are four to five months old. Barred owls eat rodents, reptiles, amphibians, and invertebrates. 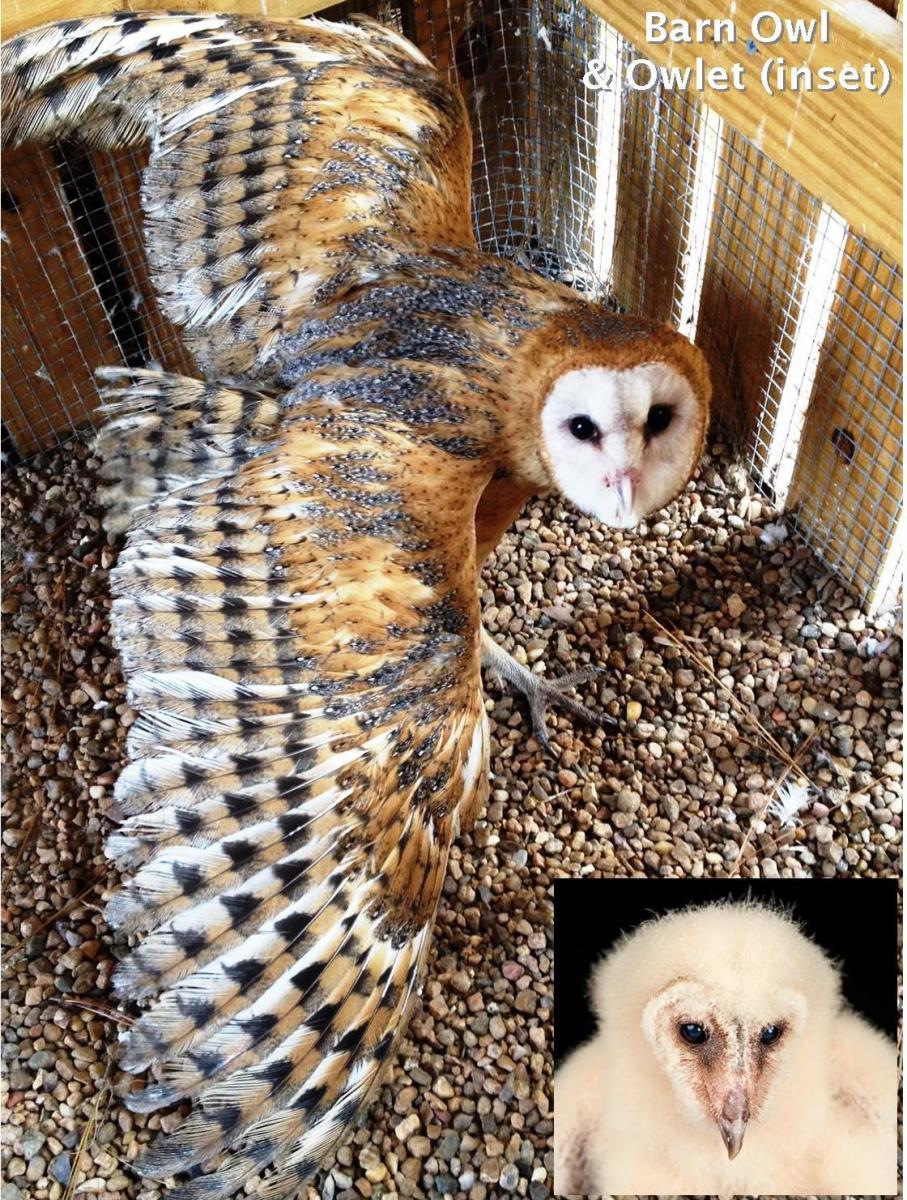 Somewhat less common but still found in our area is the barn owl. Barn owls are slender with a whitish face, chest, and belly and buffy upperparts. Their eyes are black in color. Barn Owls range in size from 12 to 16 inches tall and generally weigh 1½ pounds or less. Barn owls hunt in open habitats, preferring grasslands, marshes, agricultural fields, strips of forest, pastures, and brushy fields. They nest in tree cavities, caves, and in structures (hence the name Barn Owl). Barn Owls eat mostly small mammals, particularly rodents, shrews, bats, and rabbits. Nesting barn owls sometimes store dozens of prey items at the nest site while they are incubating to feed the young once they hatch.

The fourth owl commonly found in our area is the Eastern Screech Owl. These short, stocky owls are only about 6 to 10 inches tall and weigh only ¼ to ½ a pound. They have pointed ear tufts similar to the Great Horned Owl and are either mostly gray or mostly reddish-brown in color. Their eyes are pale yellow. Screech Owls are far more often heard than seen. They are known for their trilling or whinnying song. Screech Owls are fairly common in most types of woods and prefer to be near water. Although they would rather nest in tree cavities, they can also be attracted to man-made nesting boxes. Eggs are laid in late March or early April, with 2 to 5 eggs being usual. During nesting, the female stays in the nest except for brief dawn and dusk excursions. She and the nestlings are fed by the male. Fledgling owlets gain flight and hunting skills slowly, and they depend on their parents for food for 8 to 10 weeks after fledging. Both parents feed the youngsters at this stage. Eastern Screech Owls eat small birds, rodents, and surprisingly large numbers of earthworms, insects, crayfish, tadpoles, frogs, and lizards.

So, if you are out and about enjoying a cool, crisp fall evening, keep your eyes and ears peeled to see if you can observe any of our local nocturnal beauties. If you want to learn to recognize some of the calls of these owls, check out the following link: www.audubon.org/news/learn-identify-five-owls-their-calls. To learn more about what we do and see pictures of many of the animals we assist, you can view our Facebook page at www.facebook.com/SavingTexasWildlife.