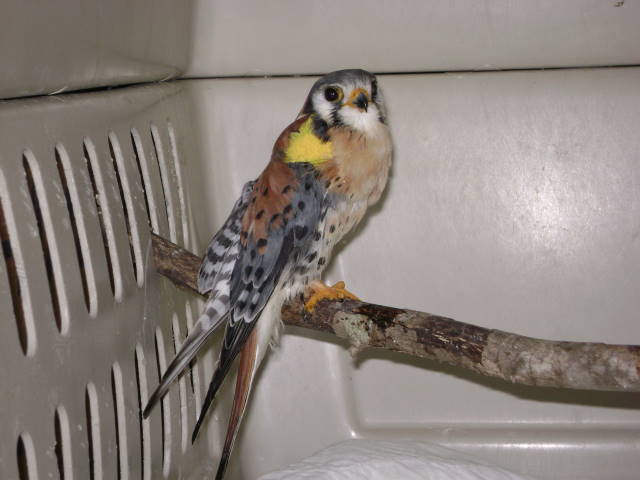 Our work never stops. Our first intake of the year is this adult male Kestrel (a falcon.) He was found in the middle of Hwy 105 in Montgomery and came to us on January 1. He was hit by car which fractured the ulna and radius bones in his wing. The yellow you see is the wing wrap to keep the bones aligned and keep him from causing more damage moving the wing. He has a body wrap to keep the wing tucked to his body. He is being hand fed since Kestrels usually eat on the fly
A juvenile raccoon was brought into the center January 3 after being attacked by dogs. He was not showing signs of fear which means that he was kept as someone’s pet and then “set free”. He probably has also imprinted on dogs and didn’t know enough to run away. He’s being treated with antibiotics for his bite wounds and then we’ll see if he can be taught that he is a wild animal which is often a long and costly process. He went went to the vet today to have his wounds looked at as we were thinking they were necrotic. They were, so he is having surgery today to clean up the wound site and will then have a lengthy convalescence to recover. If you would like to donate to help offset the costs of his care, please click on the “donate” link at the top right of this page. We’ll keep everyone posted on his progress on our Facebook site.

While our educational programs help people learn how to coexist with wildlife, the growing number of people, cars and pets means that every year we will see more injured and orphaned wildlife. Thank you to everyone who donates time, supplies or money to help give wildlife a second chance.